In one of our last posts, we talked about how to recognize the signs of AC compressor failure in your Honda. But if you own a 2002 – 2006 Honda CR-V, you're at risk of a specific type of AC compressor failure that it even more serious. It might feel like there is always a problem with your air conditioning or that it’s never been as good as it was when new. With all the days in service and the huge amounts of money spent, you may start to think that you're going crazy. Why doesn't your AC feel cold and why can't anyone find the real problem?

If this sounds familiar, you're not crazy. But you're probably experiencing a problem known to the 2002-2006 Honda CRV as "Black Death."

The factory air conditioning compressor that was initially installed in the Honda CRV has an above average failure rate. All too often, it will self-destruct, shattering its internals and forcing the bits and pieces through the rest of your AC system. The microscopic metal shavings mix with the lubricating oil and create a tough "black" sludge that clogs the narrow passages in the system and is impossible to clean out completely. 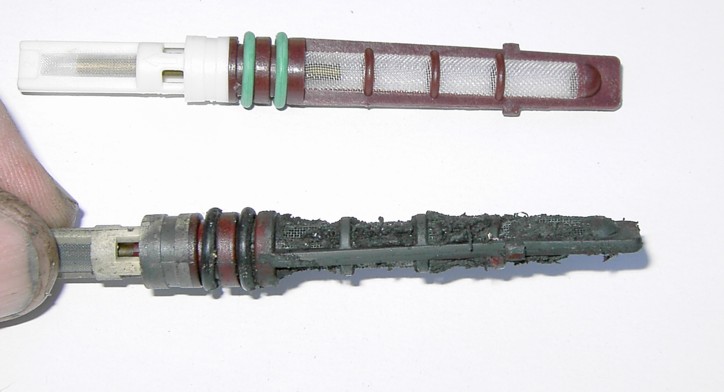 Honda CRV Black Death is very different than most other types of AC system failure. When the system is shut down and begins to cool, the black sludge solidifies and hardens over every single surface. Even after fitting a new compressor, the repeated on and off cycles of the system serves to strengthen the hard sludge and makes it even harder to remove. If you're lucky you may find a local shop with an AC flushing system which will get a little bit of the contamination out.

But a system flush is not strong enough to dissolve the Honda CRV Black Death sludge or to force the microscopic particles out of the condenser, hoses, and the tiny orifices inside the expansion valve that they are lodged in. In most of the cases we see at BKHondaParts.com, the system simply can’t be cleaned well enough to restore good operation. The only recommended effective way to permanently remove the contamination is to rebuild the entire system.

Honda CRV Black Death is also the main reason we see these AC systems fail so soon after repair. Often, the extent of the damage is invisible or owners will try to replace just the compressor to save time and money on what is normally a costly repair. But the Black Death contamination soon creeps into the new parts which causes yet another failure, leaving you without cool air.

If your Honda CRV AC system continually breaks down and no one can seem to find the problem after it was first fixed, you may be experiencing Honda CRV Black Death. One of the telltale signs of Black Death is a seized AC Compressor the first time the system failed. If you haven’t yet encountered Black Death in your Honda CR-V AC system, you should replace the original unit with a new revised Honda CRV AC compressor unit before it's too late and before it costs you thousands of dollars in repairs and hours in a service bay.

If you suspect that you’re a victim of Honda CRV Black Death, get in contact with one of our experienced Honda parts experts by phone at 877-674-5525 or by email. We'll answer any questions you have and make sure you only get the right parts to get you back on the road, driving your Honda CRV in comfort.